Posted by Stephanie Tickner on Thursday, July 4, 2013 Under: Ponderings of the Month


The last time I posted to my blog in April, at the end I wrote:

"I have the following art projects on deck:

I plan to submit, hopefully, three paintings to the Historical Society of Cheshire County juried exhibit, 64 Miles, The Ashuelot River. The Ashuelot River travels 64 miles in southwest New Hampshire from Pillsbury State Park in Washington, NH to the Connecticut River in Hinsdale, NH. The goal of the exhibition is to pay "homage to the largely over looked Ashuelot River as the great natural resource that it is to this area. Rich in history and natural beauty, the river offers extensive artistic opportunities for the visual artist." The exhibit will be in July.

I also plan to submit two already completed paintings for consideration for the Monadnock Area Artists Association 2013 Juried Fine Art Show that will be at the Jaffrey Civic Center's Cunningham Gallery in June and July."

Well, things didn't quite work out that way. With the Monadnock Area Artists Association, I missed the deadline because I didn't realize until it was too late that digital images had to be submitted on a mailed cd. I just assumed it would be like other juried exhibits and I would submit my paintings as .jpgs via email. Ok...no chance at the exhibit in Jaffrey.

Then, after much chaos that I will write about later, I finally got one new painting ready for the 64 Miles Ashuelot exhibit. I got it to the jury in person, with just 15 minutes to spare. The great news is that my painting was juried in. The bad news is that the frame did not cooperate. There was a message on my answering machine yesterday that the back of it kept coming off when they tried to hang the painting. With the weirdness I have gone through this summer, and knowing that they juried in so many beautiful paintings that they had to find a second exhibit space, I decided that I will pick up my painting next week and consider it a new painting for Art in the Park over Labor Day weekend in Keene, NH.

In between those two issues, I started seeing ads for Keene, NH's annual Art Walk. I have been juried into this event for many years, but this year I didn't receive any emails from the committee to let me know it was time to apply. I sent them an email to ask them to re-add me to their mailing list. I'll have to try again next year.

A couple of positive things did happen during all craziness. In May I entered the Figurative Art Exhibition competition on the online gallery Light, Space & Time. Then in early June I received an email that I had received on of five Honorable Mentions for my commissioned painting, "Chach and Jojo." 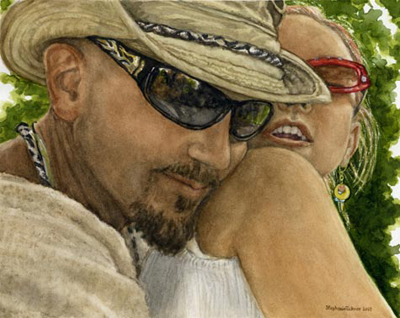 It is really an honor to have received this recognition as there were 592 entries from 23 different countries and 32 states! You can see the other awarded paintings on the Figurative Art Exhibition gallery page. 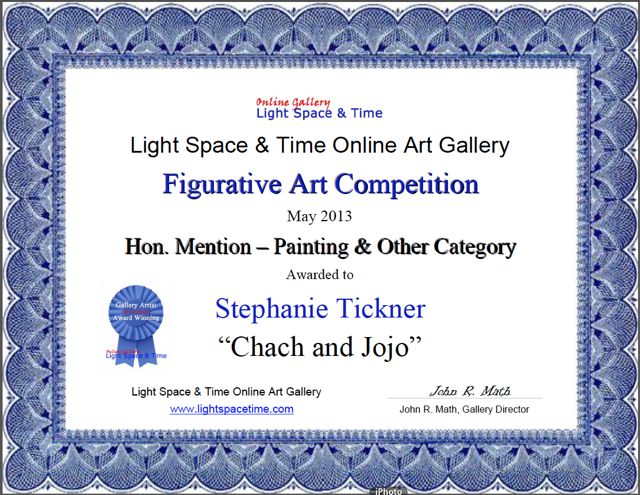 I was also asked to exhibit two of my prints in the Alstead, NH 2013 Sestercentennial Celebration Art Show at the beautiful Shedd-Porter Library for the month of July. I have driven by that library so many times, but never stopped in until I dropped off my prints. I couldn't believe how stunning the architecture was. According to the website, "Shedd-Porter Memorial Library, Alstead, New Hampshire. Designed in the Beaux-Arts style by Boston architects William H. McLean and Albert H. Wright, it was built in 1910 as a gift from John Graves Shedd and Mary Roenna Porter. The Shedd-Porter Memorial Library is listed in the National Register of Historic Places as well as in the New Hampshire Register of Historic Places." I was in a hurry that day, but I plan to look around more when I pick up the Alstead prints I brought in. Here they are: 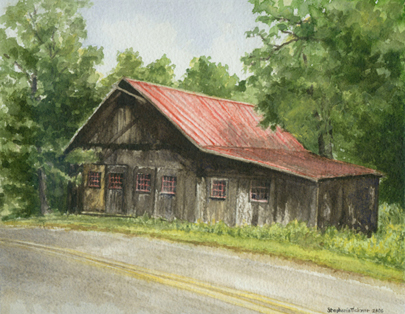 "On the Way to Alstead" 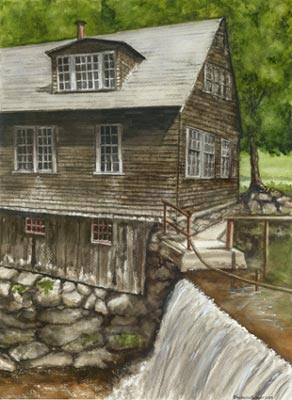 Back to the story around trying to paint for the Ashuelot River exhibit. At the end of May I realized that I still had two weeks of vacation time to use at work. My boss suggested I take the first two weeks in June and have a painting vacation to get ready for the exhibit. I was so excited to have the gift of self time. Unfortunately, on the eve of my home-paint-staycation, a very scary thunderstorm came through Marlow, complete with what appeared to be a microburst. When the kids and I heard a tree crack we grabbed the dogs and ran to the basement. This is what we saw when we came up. 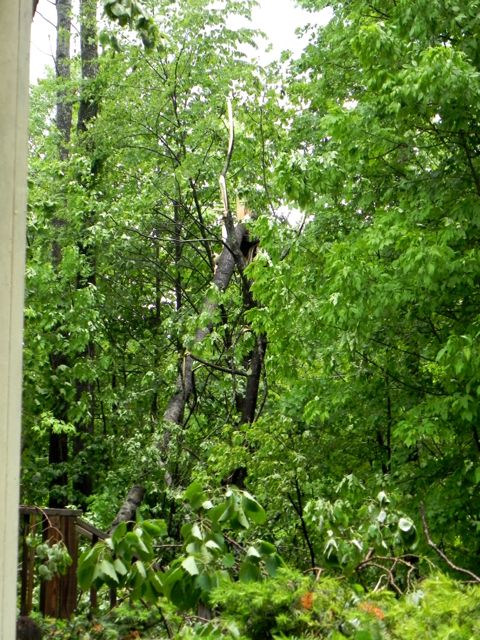 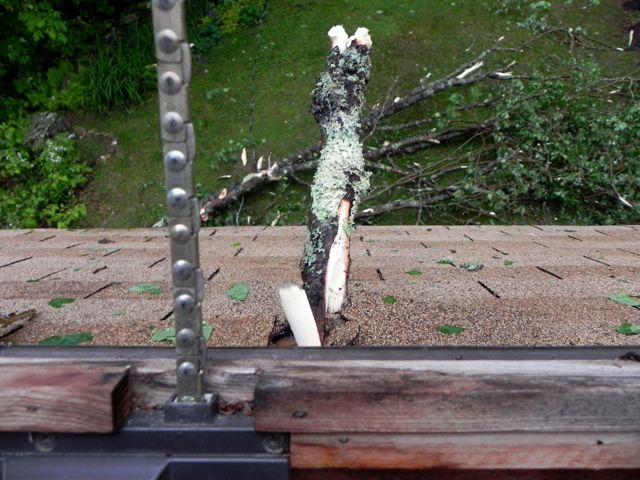 Branches punctured the roof into my son's room in two places! 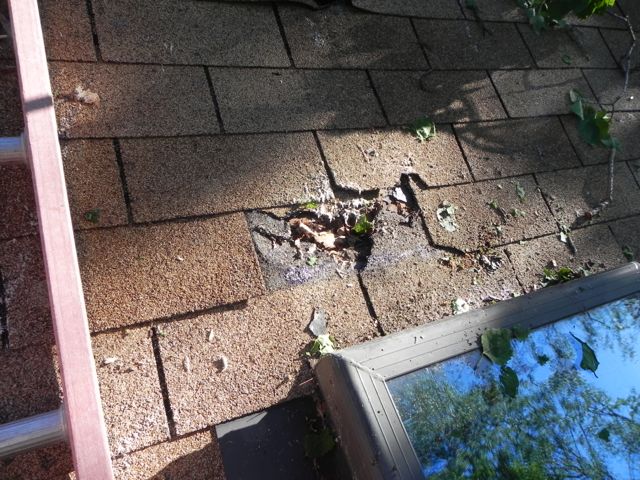 Thankfully everyone was safe, but unfortunately, I lost my first painting week dealing with the mess. It didn't help that my husband was on a business trip and I did everything myself. The tree took down the electric and telephone wires, knocked the tv and internet antennas off the roof, and we went without water for a week because even with the help of a friend and then a plumber, we couldn't get the electric water pump started again. I am so grateful to kind friends and neighbors for bringing us food and water and letting us take showers, and to friends who patched the roof holes and chainsawed the downed tree for free.

The second week went much better, and I was able to complete this fall painting of the Ashuelot River in Marlow. I call it "The Ashuelot River from the Bridge to Cheshire Earth" since that is the name of the gravel company on the other side of the bridge. It's too bad it won't be in the exhibit after all that chaos, but I am glad to have it for Art in the Park. 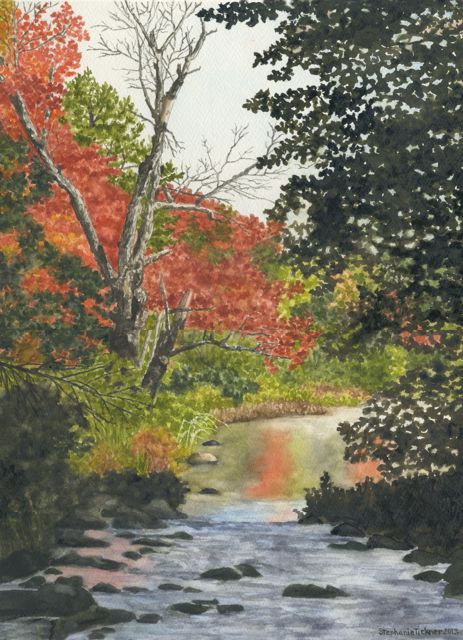 In closing, the crazy weather we have been having this summer has continued. Today it will be in the 90s with oppressive humidity. For a couple of weeks before, however, we had days and days of rain, sometimes incredible downpours. Like June 2013, this area is once again experiencing flash flooding and roads washing out. On my ride home on Wednesday, even after the water had gone down quite a bit since the early morning, this was what the Ashuelot looked like. 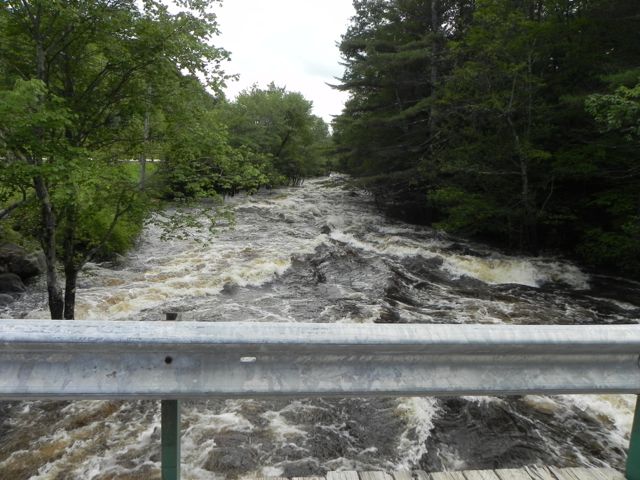 This is from the same bridge as the painting, looking downstream. 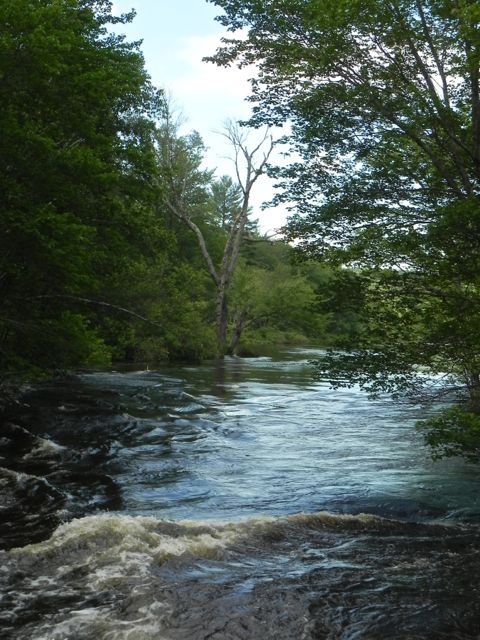 This is the same view as the painting. The dead tree is in the water! 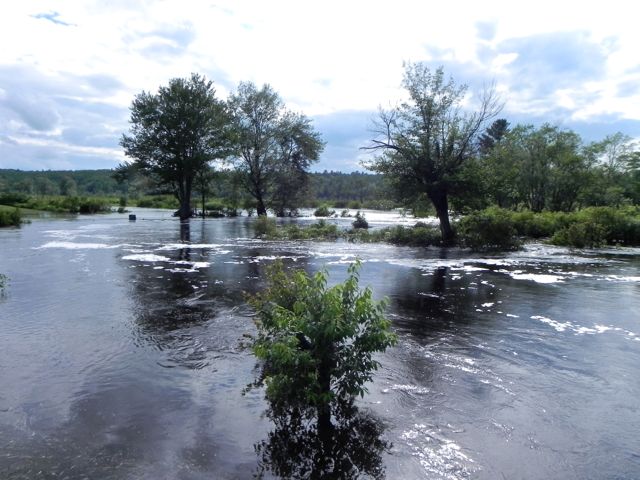 The Ashuelot near Marlow village, well over it's banks. 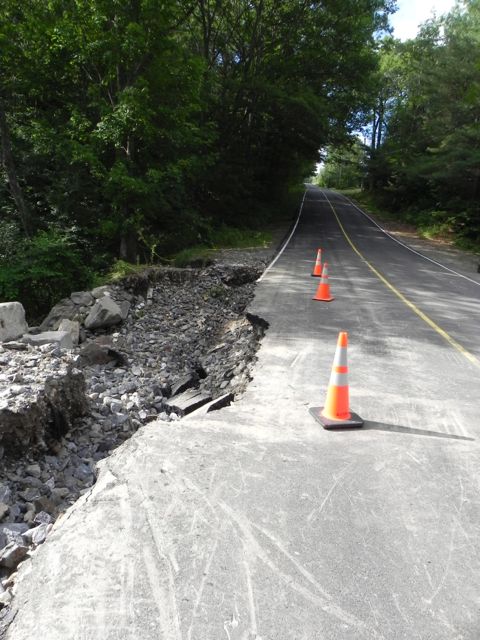 This road was just repaved a couple of months ago :( 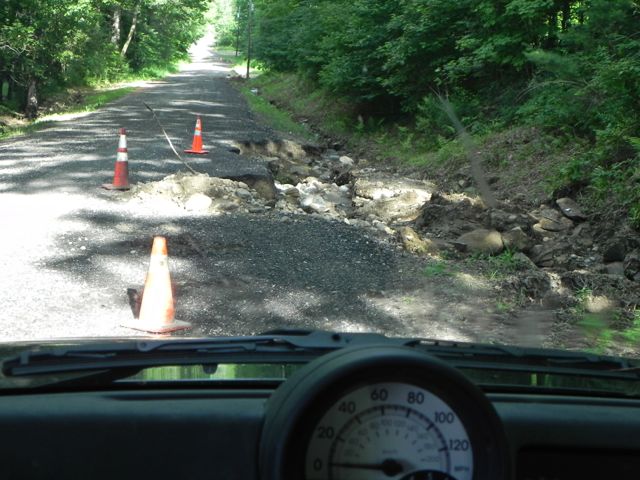 Along the dirt road home.

As a farmer friend wrote on facebook on Independence Day, "a break from the rain, catching up on the farm, negotiating climate change design classes (our town infrastructure can't handle yearly hundred-year floods, never mind 2 in a week)... Rivers are raging." It's so very true. I send out healing wishes for our troubled earth.

In : Ponderings of the Month