Posted by Stephanie Tickner on Sunday, January 15, 2012 Under: Art Stories
December was a very busy painting month for me. I am grateful to a friend, a coworker, and a new word-of-mouth customer who asked me to paint Christmas gifts for them to give to family and friends. As with each commission I paint, these three paintings have meaningful stories behind them. Over the years, I have heard many emotional and beautiful stories from the people who ask me to paint. It adds so much more meaning to my work. 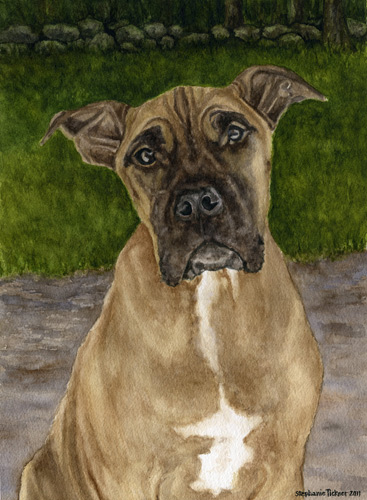 Libby was the first commission that I did for someone who had learned of my paintings through a friend of hers who had received one of my paintings as a gift (I love word of mouth referrals!). I learned that this beautiful dog, Libby, had sadly passed away earlier in 2011, and that this woman planned to give the painting to Libby's owners as a way to remember her. It was fun to create the composition for this painting. The photograph I used was of Libby in the back of her car. I learned from talking to the woman how much Libby loved taking walks in her rural surroundings, so we decided it would be nice to have her be in the kind of place she enjoyed on a dirt road surrounded by woods. I love Libby's great ears and her expression. She must have been a very sweet girl. 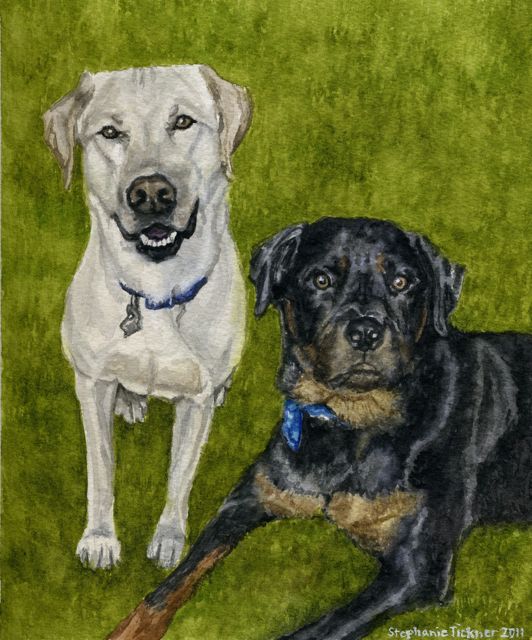 The second painting I finished in December was for a coworker of mine. She had been looking through my commission book at the Antioch Winterfest craft fair and stopped on a painting I did of a dog named Toby. She asked if I would have time to do a painting of her daughter's two dogs who had also passed on in 2011. They were her grand-dogs, Lucky and Vincent, and losing them had been very hard on the whole family. She thought a painting would be a heartfelt way to remember them. I created this painting from two photos, one of Lucky (the white dog) outside in the sand, and one of Vincent inside the house. My coworker suggested the grassy surroundings. I learned that these two were best buddies, having grown up together since they were puppies. After Christmas my coworker told me that the painting cause lots of tears, but they were tears of happiness and love. It means so much to me to hear that my paintings touch people that way. 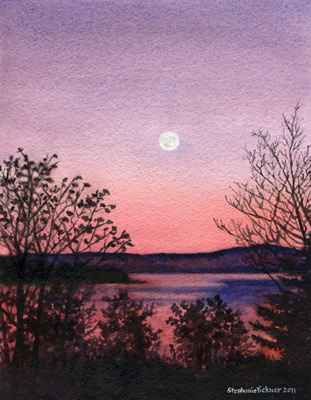 The last painting I did in December was for my friend who lives up the hill from me. We were both excited that I managed to finish it and get it framed as a gift for her husband just in time on Christmas eve day! The scene is of First Connecticut Lake in Pittsburgh, New Hampshire. Her family co-owned a camp way up north in Pittsburgh, and this year she took over the ownership of the small cabin. To celebrate, she and her family drove up for Columbus Day weekend. She told me that when they were almost there, they saw this amazing sunset with the full moon rising out of the lake. She stopped to take some photos with her film camera. When she got the pictures back, she was disappointed that the camera did not capture what she had seen with her eyes. After playing with iPhoto a bit, I asked if these were the colors she saw, and she said they were. So, another painting came to life capturing a moment that was very special to her and her family.

I look forward to seeing what stories and images come about in 2012. Onward!